A Quiet Revolution in the Treatment of Childhood Diarrhea

Far from the world’s fears about Ebola and MERS, a quiet revolution is taking place in the diagnosis of a disease much more prosaic but far more threatening: childhood diarrhea. After pneumonia, diarrhea is the deadliest threat to infants worldwide, killing about 700,000 every year.

More than 40 pathogens — viruses, bacteria and parasites — cause diarrhea in children in developing countries. According to decades-old guidelines from the World Health Organization, these children should receive oral rehydration; intravenous rehydration if they cannot keep fluids down; and a zinc supplement. 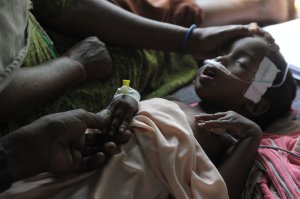 The guidelines also say that children should receive antibiotics only when there is blood in their stool. At the time the recommendations were written, the best science indicated that blood was a sign of bacterial infection, and bacterial diarrhea is usually the most dangerous.

But bacterial causes are more common than had been realized, recent studies have found, and blood is not always present. And because many children with diarrhea do not receive antibiotics under W.H.O. guidelines, some experts say, many die or end up stunted by persistent infections that could have been cured.

First drafted more than 30 years ago, the guidelines “were developed based on what everybody thought at the time — that most diarrhea was viral, and if it was bacterial, it would probably have blood in it,” said Dr. Jeffrey M. Pernica, a pediatrician at McMaster University Medical School in Canada.

With the advent of improved diagnostic technology, he added, “Now we can tell who’s really got what.”

A major study into causes of childhood diarrhea, the Global Enteric Multicenter Study published in 2013, found the top five to be rotavirus, the Cryptosporidium parasite, two different strains of E. coli bacteria, and Shigella bacteria.

In various countries, other bacteria — including Aeromonas, Campylobacter and Vibrio cholerae, the cause of cholera — were also important.

“Actually, blood is a very poor marker” of bacterial diarrhea, said Dr. David M. Goldfarb, a microbiologist at the University of British Columbia who led a recent study of children’s diarrhea in Botswana and advocates changing the guidelines. “And it does not predict death.”

In diarrhea, time is crucial. Infants often arrive at hospitals close to death from dehydration, so quick decisions must be made. When the cause is viral, doctors can only hope the immune system kills the virus. Various bacterial infections are treated with various antibiotics. Parasites must be killed with other drugs.

Accurate diagnosis once took days. Stool samples were frozen and shipped to labs for microscopic evaluation or antibody tests. Clinics in poor countries, unable to do all that, used the simple W.H.O. guidelines.

But the price for not providing antibiotics when they are needed can be high.

Repeated bouts of diarrhea flush nutrients out of the intestines and leave victims physically and intellectually stunted. Children who are chronically malnourished before age 2 grow up to do worse in school, are shorter than normal, and as adults give birth to smaller infants.

Tarik Jasarevic, a spokesman for the W.H.O., responded that new studies were “important, but not enough to change guidelines.”

Some experts object to that reasoning, arguing that wealthy tourists at little risk of death routinely take antibiotics for diarrhea picked up in the same places.

“It’s not that the guidelines are bad, they’re just old,” said Dr. Anita Zaidi, the director for diarrheal diseases at the Bill & Melinda Gates Foundation, which has paid for much of the newest research.

Dr. Zaidi, a pediatrician who has worked in some of Pakistan’s poorest neighborhoods, says that she does not believe that fears of creating resistance justify withholding antibiotics.

“When travelers get them, how can we not give them to children under 2 at risk of death?” she said. “It’s a matter of equity.”

An unexpected and scary finding of the Global Enteric Multicenter Study was that children hospitalized until they were “cured” by standard treatment were eight times as likely to die during a two-month follow-up period as healthy children who were never hospitalized. That suggests that standard treatment is deeply flawed, but it is not clear how.

Dr. Zaidi said she had three theories: that children with diarrhea had other pathogens that were never detected, that diarrhea had so inflamed their intestines that the children could not absorb food, or that they were so weakened by surviving one infection that a second killed them.

Dr. Magnus Lindh, a diarrhea specialist at the University of Gothenburg in Sweden, who led a smaller study in Rwanda, said many children had several gut pathogens simultaneously and it was hard to know which caused their diarrhea.

The best way to guess, he said, was to count how many times a machine used to detect genes by polymerase chain reaction, or P.C.R., had to double a sample’s DNA to get a positive reading. A low “cycle count” implies a lot of pathogen.

Using P.C.R. technology to make accurate diagnoses on the spot would save lives, as it has in tuberculosis. “It’s a lot more idiot-proof,” Dr. Pernica said.

But P.C.R. machines are expensive. Full-size machines can cost $30,000 or more, and $50 per test. Small specialized versions exist, like the GeneXpert, which has revolutionized the diagnosis of tuberculosis in developing countries. But a small P.C.R. machine intended just for diarrhea has not been produced.

In the meantime, Canadian researchers have developed “flocked swabs” resembling tiny nylon bottle brushes with stoppers on their stems to make sure they cannot be inserted too far into the rectum. They pick up enough DNA to test, obviating the need to wait for a messy stool sample. But the swab still requires P.C.R. testing.

Some experts question whether P.C.R. diagnosis will ever be cost-effective. It is worth the expense to accurately diagnose tuberculosis, which requires a six-month drug regimen, said Dr. Eric R. Houpt, a diagnostics expert at the University of Virginia Medical School.

Instead of spending many millions of dollars to develop and distribute P.C.R. machines for on-the-spot diagnosis of diarrhea, Dr. Zaidi and others argue it would make more sense to just revise the W.H.O. guidelines to treat children more aggressively.

“You might just get by always giving a very sick child whatever antibiotic you know works in that general area,” Dr. Zaidi said.

The guidelines may yet be changed, depending on what further research finds, Mr. Jasarevic said. The W.H.O. is collaborating with the Bill & Melinda Gates Foundation on a major study to see which children would benefit from taking antibiotics even when doctors do not know what is making them ill.