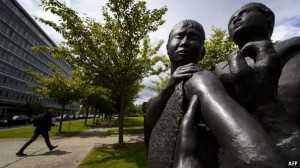 The Economist – PERCHED on a hill in Geneva above the city’s cluster of international agencies, the modernist headquarters of the World Health Organisation (WHO, pictured above) seems a manifestation of the organisation’s grand mission: to lead the world on health. But nearby sits a stinging reminder of its shortcomings. Visitors to the WHO must first pass the headquarters of UNAIDS, which was set up separately after a widespread loss of faith in the WHO’s ability to tackle the AIDS epidemic.

Two decades after that failure, many health experts fear history is repeating itself. After an outbreak of Ebola was identified in west Africa in March, the WHO’s response was slow, disorganised and lacking in leadership. In September Ban Ki-moon, the UN secretary-general, set up an independent Ebola mission.

Ebola exposed weaknesses in the WHO’s ability to respond to disease outbreaks. But it also highlighted deeper problems with the WHO, involving funding, structure and staff. Founded in 1948 to help all people attain “the highest possible level of health”, everything from obesity to antibiotic resistance falls within its remit. But its activities cost far more than can be covered by the dues its 194 member states pay, which are calculated according to their wealth and population. These sums have not risen since the 1990s.

The gap has been filled by contributions from rich countries, philanthropic foundations, other multilateral bodies, non-governmental organisations and private interests, such as pharmaceutical firms. In the 1990s these made up around half of the WHO’s budget. Now they provide nearly 80% of it. This shift makes it hard for the WHO to plan ahead and leaves it exposed to the ups and downs of the world economy. The financial crisis hit voluntary contributions. Its two-year budget for 2010-11 was nearly $5 billion; for 2014-15 it is less than $4 billion. (By comparison, America’s Centres for Disease Control spent nearly $7 billion this year alone.)

The squeeze has seen the WHO continue to spend on chronic diseases and primary health care—but slash its budget for responding to disease outbreaks by half. This may have seemed reasonable: year after year, chronic disease and poor health care are bigger killers. But a rapid response to Ebola would have been far cheaper in the long run than scrambling to catch up.

Its reliance on voluntary donations means that the WHO struggles to shift funding fast—or indeed to decide how to spend a big chunk of its budget in the first place. Most donations are for specific purposes. The Bill & Melinda Gates Foundation has given money to fight malaria; Rotary International bankrolls polio eradication. Both are worthy causes, but the WHO’s role has been to follow, not to lead. “The director-general is highly limited in how she can address global health challenges, given that she has very little control over the budget,” says Steven Hoffman of the University of Ottawa.

Such earmarking became more common in the 1990s, when donors lost confidence in the WHO’s decision-making. But the organisation has improved of late, says Nils Daulaire, a former American representative to it, by basing its budget on more realistic goals. This is part of a reform process begun in 2010. In order to wrest back the WHO’s agenda, potential donors are now approached with a list of programmes that need funding. “We must have the courage to say ‘no’ to money if it doesn’t match our priorities,” says Margaret Chan, the director-general. But some doubt that will happen. “The true test will be how much does the WHO actually reject,” says David Stuckler of Oxford University. “Cynically, I suspect very little.”

To avoid opposition, the reforms have skirted another of the WHO’s biggest problems. Under its constitution its six regional offices are largely autonomous. Their directors are chosen by, and often beholden to, local ministers of health. Some offices are treated as tools for patronage by politicians. “The director-general has very little control over the organisation’s budget, human resources and work in countries, including in case of emergencies,” says Peter Piot of the London School of Hygiene and Tropical Medicine.

These institutional weaknesses hampered the WHO’s response to Ebola. Africa needs the strongest regional office, since its health needs are greatest, says Dr Piot. Instead it has the weakest: “particularly politicised with often incompetent people”. Reports of tension between local staff and headquarters were borne out when Dr Chan eventually replaced the WHO’s top officials in Guinea, Liberia and Sierra Leone, the countries hardest hit by the virus.

The WHO’s technical side is meant to arm the organisation against unreasonable demands from politicians and donors, by providing solid evidence for the organisation’s policies. But though it was once a world leader in health research, it is now considered unexceptional. Its recommendations do not always match the best available evidence, says Mr Hoffman. Where it has fallen short, others have moved in. The Institute for Health Metrics and Evaluation at Washington University, for example, was created in 2007 with money from the Gates Foundation after the WHO’s statistics were found wanting.

Bureaucracy, budget cuts, political interference and tolerance for incompetence all make it hard to attract and keep good staff. There are too many “medocrats”—mediocre bureaucrats with a medical background—says Sophie Harman of Queen Mary University in London. Asked why he stays at the WHO, Pierre Formenty, one of its few Ebola experts, cannot come up with a reason. In 2012 just 0.1% of non-support staff were economists, 1.4% lawyers and 1.6% social scientists, meaning it is ill-equipped to make well-rounded arguments for its policies.

As the WHO tries to reform, and the Gates Foundation, World Bank and others encroach on its turf, many see a need for greater daring. Some have called for it to be split in two, with separate political and technical agencies. Others want its overly broad mandate slimmed down. A few want it abolished altogether. But most think it has a valuable role to play as an accountable advocate for public health, a forum for research and negotiation, and a director of health interventions. They just want it to do those things better.

From the print edition: International