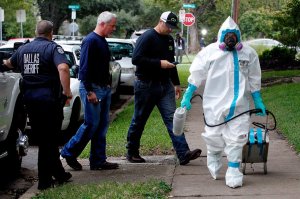 Vox – One of the popular remedies being floated to address Ebola fears is to isolate West Africa — the Ebola hot zone — and close America off to travelers from the region. Just turn on CNN to see this argument being bandied about or tune into the political rhetoric around the crisis. As Arkansas Senate candidate Tom Cotton said recently, “We’ve got an Ebola outbreak, we have bad actors that can come across the border; we need to seal the border and secure it.”

The fear is understandable, especially as Ebola appears poised to spread closer to home. America last week recorded its first Ebola death with the passing of a Liberian visitor Thomas Duncan, and yesterday, the CDC announced the first-ever case of Ebola transmission to Duncan’s nurse.

As Ebola panic peaks, conspiracy theories are spreading fast. So now is the time when we need to check our irrational reactions to this horrible crisis and avoid policies that will divert scarce resources from actual remedies. And we know from past experience that airport screening and travel bans are more about quelling the public’s fears than offering any real boost to public health security.

Last week, the US government announced a new airport screening regime for incoming travelers from West Africa. Passengers arriving from Sierra Leone, Guinea and Liberia to five US airports will now be questioned about potential Ebola exposure and have their temperatures checked.

Exit screening has already been underway in West Africa since the summer, and famously failed in the case of Duncan. He flew to Dallas with Ebola incubating in his body, and did not disclose the fact that he had close contact with a dying Ebola patient days before his trip.

A CANADIAN STUDY SHOWED THAT AIRPORT SCREENING DURING THE 2003 SARS PANDEMIC DIDN’T DETECT A SINGLE CASE.
This failure shouldn’t be a surprise. We know from past outbreaks that these techniques don’t work. Entry and exit screening was used during the 2003 SARS pandemic. A Canadian study of the public-health response following the outbreak found that airport screening was a waste of money and human resources: it didn’t detect a single case of the disease.

This screening was “inefficient and ineffective,” the authors of the assessment concluded, noting that the Canadian public health agency should seriously rethink using it again in the future. Another study found that those clunky and costly thermal scanners used to detect fever in airports were similarly useless when it came to singling out sick people who are trying to enter a country. So spending extra money to identify feverish people at airports — especially those with Ebola who can be undetectable for days until they are symptomatic — is an expensive and ineffectual exercise.

Closing borders would be a disaster

Liberian Army and US Marine engineers work to set up a landing zone next to an Ebola treatment center in Tubmanburg, Liberia. (John Moore/Getty Images)

Taking airline panic one step further, another idea floating around these days is to just close off West Africa to the rest of the world. Allow Ebola to fester over there, and keep people safe over here.

In opposing this idea, public health experts unanimously agree: sealing borders will not stop Ebola spread and will only exacerbate the crisis in West Africa — and heighten the risk of a global pandemic.

There are three reasons why it’s a crazy idea. The first is that it just won’t work. In CDC Director Tom Freiden’s words, “Even when governments restrict travel and trade, people in affected countries still find a way to move and it is even harder to track them systematically.” In other words, determined people will find a way to cross borders anyway, but unlike at airports, we can’t track their movements.

90 PERCENT OF ANY OUTBREAK’S ECONOMIC COSTS “COME FROM IRRATIONAL AND DISORGANIZED EFFORTS OF THE PUBLIC TO AVOID INFECTION.”
The second is that it would actually make stopping the outbreak in West Africa more difficult. Dr. Anthony Fauci, director of the National Institute of Allergy and Infectious Diseases, said, “To completely seal off and don’t let planes in or out of the West African countries involved, then you could paradoxically make things much worse in the sense that you can’t get supplies in, you can’t get help in, you can’t get the kinds of things in there that we need to contain the epidemic.”

Some have suggested a half-measure: close borders allowing exceptions for doctors, aid workers, and medical supplies only. The problem with this idea is that responses to humanitarian crises are not well-organized affairs. They’re chaos. A bureaucratic regime that systematically screens who can go in and out of affected countries would only slow down or make impossible the much-needed relief. Plus, many aid workers — like reserve staff for Doctors Without Borders — would be responsible for booking their own tickets to get to the affected region. How would they do this then? And how long would it take to get them over there?

The third reason closing borders is nuts is that it will devastate the economies of West Africa and further destroy the limited health systems there. The World Bank already estimates this outbreak could cost West African economies up to $33 billion. That’s a lot for any country, but especially when you’re talking about some of the world’s poorest. World Health Organization director Margaret Chan reminded us that 90 percent of any outbreak’s economic costs “come from irrational and disorganized efforts of the public to avoid infection.”

The best way to protect Americans is by protecting West Africans

Nurses wearing a protective suit escort a man infected with the Ebola virus to a hospital in Monrovia, Liberia. (Zoom Dosso)

We live in a world where many crises are predictable. We don’t know when the next one will strike, or where, but we know it will eventually come. In the health field, we even know approximately what it will look like. Every few years, for example, we seem to get another global pandemic that spreads across borders as if they don’t exist. In 2002 it was SARS, then in 2009 it was Swine Flu. Today it’s Ebola. In five year’s time it will be something else.

If we know these health crises are coming, why is it that we never seem adequately prepared? It’s true that we can’t prepare for every kind of outbreak in every place at every time; having a large standing army of white coated doctors at the ready would just be too expensive. But there is no reason we can’t use the lessons learned from past outbreaks to make better choices in this time of Ebola.

We also need to stop diverting precious resources on policies and procedures that do nothing to help the public. Instead of using airport screening and entertaining plans to seal borders, the government should focus its attention and resources on West Africa where the outbreak is out of control and where real action could actually be helpful in protecting America’s health security. Because we know this for sure: the longer Ebola rages on in West Africa, the more people get the disease there, the more of a chance it has of spreading elsewhere.

Two people in the US have been stricken by Ebola; more than 8,000 have in West Africa. The best way to avoid more cases in America is by protecting West Africans.

What is the Ebola virus?

Most people’s views of Ebola are probably informed by Hollywood — they think of it as a deadly and contagious virus that swirls around the world, striking everyone in its path and causing them to hemorrhage from their eyeballs, ears and mouth until there is no more blood to spill.

In reality, Ebola is something quite different. About half of the people who contract Ebola die. The others return to a normal life after a months-long recovery that can include periods of hair loss, sensory changes, weakness, fatigue, headaches, eye and liver inflammation.

As for the blood: While Ebola can cause people to hemorrhage, about half of Ebola sufferers ever experience that Biblical bleeding that’s become synonymous with the virus.

More often than not, Ebola strikes like the worst and most humiliating flu you could imagine. People get the sweats, along with body aches and pains. Then they start vomiting and having uncontrollable diarrhea. These symptoms can appear anywhere between two and 21 days after exposure to the virus. Sometimes, they go into shock. Sometimes, they bleed. Again, about half of those infected with the virus die, and this usually happens fairly quickly — within a few days or a couple of weeks of getting sick.

There are five strains of Ebola, four of which have caused the disease in humans: Zaire, Sudan, Taï Forest, and Bundibugyo. The fifth, Reston, has infected nonhuman primates only. Though scientists haven’t been able to confirm this, the animal host of Ebola is widely believed to be the fruit bat, and the virus only seldomly makes the leap into humans.

The Ebola virus is extremely rare. Among the leading causes of death in Africa, it only accounts for a tiny fraction. People are much more likely to die from AIDS, respiratory infections, or diarrhea, as you can see.

The current outbreak involves the Zaire strain, which was discovered in 1976 — the year Ebola was first identified in what was then Zaire (now the Democratic Republic of the Congo). That same year, the virus was also discovered in South Sudan.

Since 1976, there have only been about 20 known Ebola outbreaks. Until last year, the  total impact of these outbreaks included 2,357 cases and 1,548 deaths, according to the Centers for Disease Control and Prevention. They all occurred in isolated or remote areas of Africa, and Ebola never had a chance to go very far.

And that’s what makes the 2014 outbreak so remarkable: the virus has spread to five countries in Africa plus America, and has already infected more than 8,000 people. It has killed more than 4,000 people. That is more than triple the sum total of all previous outbreaks combined.